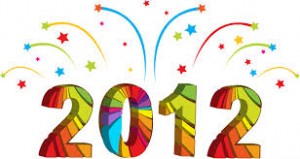 In 2011, the stock market experienced some dramatic swings, heightened volatility, managed some months of tremendous strength and sickening weakness. After an exhausting ride, the S&P 500 index returned to precisely where it started. For those who appreciate extreme precision, the market was down on the year based on the second decimal point of the index. The S&P 500 started the year at 1,257.64 and officially closed at 1,257.60. That is about a third of a basis point down and the reason the final index return has been recorded as: (0.00%). Of course the actual return that investors received includes dividends, and on this measure the S&P 500 total return was 2.11%. After clarifying the details, the market essentially tread water for the year. We commence 2012 with much of the uncertainty which hurt market returns and caused a contraction in market valuations.

Given our structured existences and tendency to ascribe meaning to the calendar flip, I’ll take a broad attempt at highlighting the major investment themes I anticipate for 2012. Be forewarned, attempts to do this a year ago would have resulted in a number of arrows which failed to hit any rings. The Arab Spring, Japan Tsunami, and manner in which Europe’s sovereign debt crisis evolved were simply unpredictable events. Reacting to a changing world is a crucial part of investing. Here are the themes I think will matter and some predictions. Should make for entertaining reading a year hence!

1)  No US recession in 2012 – I’ve been writing about how dramatically far the US economy is from any sort of recession. There are too many depressed sectors of the economy such as housing, auto, and industrial production and the corporate sector in the US is lean and mean. Without large excesses to work out it is more difficult to experience a period of negative GDP growth. Of course if this prediction is wrong, most of my other predictions are likely to be very wrong as well.

2)  Valuation matters and the market generates a 10% return – S&P 500 earnings will have grown approximately 12% in 2011 (we’ll know for sure after Q4 results are released over the next 2-months) while the market was roughly flat. A lot of bad news, fear and event risk needed to surface to lead to this result. It happened in 2011 but looking ahead I’ll predict that the market appreciates in-line with S&P earnings growth plus a little bit more in 2012. On earnings growth of 6-7%, the market should be able to produce an 8-12% total return.

4)  China doesn’t hard land – This is a difficult one to predict. There are just so many unknowns related to the Chinese economy. Is the government managed financial system ready to seize and will non-performing loans become an explosive issue? My intuition is no. China is early in their stage of economic development and has ample policy tools to avoid a hard landing. There will be scares and fears of a hard landing in the first half of 2012, but at the end of the day, supportive monetary policy revives activity and fast growth persists. The growth in China is to a certain extent being credit driven but when one examines the credit driven growth in the United States and Europe persisting for a number of decades it seems too early for China to come off the tracks because of credit or capital issues. While the export economy in China slows, the domestic economy remains relatively resilient. Evidence of this dynamic will be seen through the results of global multinationals which sell into China.

5)  Japan’s economy muddles through but the Nikkei has a double digit return year – I expect Japanese M&A to pick up meaningfully in the first half of 2012. Japanese firms are procedurally oriented and will have had time for year-end strategy reviews. There will be a spurt of global M&A to take advantage of unprecedented strength in the Yen as Japanese firms essentially “buy growth” overseas. Through the year, the Ministry of Finance gets increasingly serious about devaluing the Yen to support domestic exporters. At some point a type of dramatic solution to devalue the currency is enacted. It won’t be as explicit as what happened in Switzerland but the MOF gets the yen to devalue by 5-10% from 76.

6)  Emerging Market economic growth picks up and the stocks markets lead – The easing cycle will take place in earnest through the first half of the year in a number of emerging markets including titans like China, Brazil, Indonesia, Turkey, and Vietnam. Inflation will continue to drift lower around the world as Europe’s debt crisis persists and this enables EM central banks to counterbalance with monetary easing. EM stock markets outperform though this is somewhat by default since most of them were down some 15-20% in 2011.

7)  The US Dollar rallies – The USD dollar continues to rally slowly and steadily as an attractive option in an environment where the rest of the developed market world really needs currency depreciation.

8)  US Interest Rates go up but oh so modestly – The US 10YR yields closed near the lows at 1.88%. Yields are likely to drift higher through the year as it becomes clear there won’t be a US recession. But a recession in Europe, declining inflation, and a lack of a boom in US job creation keeps any Treasury sell-off modest. Point estimate for US Treasury rates a year hence: 2.25%.

Cheers – to a prosperous year of investing in 2012!

P.S. some items I’m not predicting: