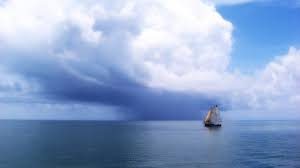 Earlier this month, April 5th was an odd day for financial markets. During market hours, it was interesting to behold one of the strongest single hours of the year, at the open, when the market rallied 20 handles on no real news of consequence. Sales could be seemingly filled at any price. One felt an aura of panicky, indiscriminate buying. Wednesday’s tape had a gushing first hour.

After stabilizing through the day, at higher levels, the market came undone starting around 2:30. As un-stoppable the rally, the sell-off was of an equal magnitude violent to the downside. The excuses, after the fact, we’re squishy: that the Fed minutes cited participants noting the market was expensive, and/or Paul Ryan mentioning that a tax plan was at least several months away. Both statements are utterly obvious. The market took quite a ride nonetheless.

Interestingly, the inexplicable action, was followed by an uneventful tape, with a slight down open, and modest rally the following day. The market instantly forgot about the drama. The trading session from earlier this month, repeats regularly, albeit with less zeal. Often the tape opens concerned of a geopolitical event, or the prospect of one, or a comment, or a tweet, or a data point, only to bottom by late morning, and rally the rest of the day back to the previous day’s close. This type of indecisive action happens sometimes, but it shouldn’t happen almost all the time! Depressed volatility of daily returns results and is tough to draw analogies from. The feel of “no big move coming” pervades.

With certainty, the lack of volatility won’t persist indefinitely, but it already has lasted longer than many expected. When does the calmness fade? Your guess, dear reader, is as good as CJF’s. The newly elected Trump administration barks loudly. After the honeymoon period, some volatility is sure to kick in, simply based on ‎the passage of time, and, as we grow closer to a time frame when bold guarantees, and proclamations, are held to task. For now, in the present, the holding pattern continues. With earnings season approaching it will be interesting to see the extent of individual stock turbulence beneath the market’s calm surface.