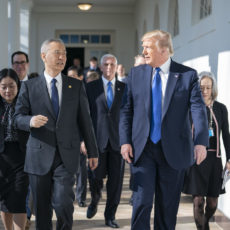 In an unseemly signing ceremony, with a plethora of US CEOs and government officials, 3-4 dignitaries from China, and much bravado from President Trump, the Phase One US-China trade deal was signed and presented to the world. Markets cheered. Aside from the spectacle of it all, there is some cause for short-term optimism over a thawing of US-China trade tension. The business environment stabilizes heading into an election year. The trade deal itself is a 94-page document which very few will read. The document delves into a detailed discussion of many contentious topics such as intellectual property rights, technology transfer, financial services, and exchange rate management. The trade issues were known ahead of time, and remain unresolved. The enforcement mechanism seems purposefully nebulous, with each side deciding whether the other side is delivering against the spirit of the deal. In an election year there is little incentive for re-escalation of trade tension. The most concrete part of the deal revolves around increased exports from US to China. A tremendous jump is forecast for US exports of manufactured goods, energy, agricultural products, and services. Experts are skeptical that delivery of these promises is possible. Can the US, already at full employment, increase production so dramatically? Does China have the capacity for an unlimited pick up in imports while its economy is weak?

CJF notes a few potential implications/unintended consequences from the deal: