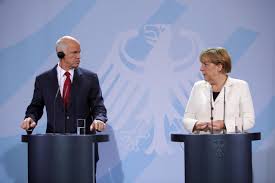 Greece will ultimately stay on board. There I’ve said it – and it is really what I think will happen. There were a number of “unity” headlines hitting over night which have led to a continuation of the rally in global risk assets. Emerging Markets which looked sufficiently panic sold to call out yesterday are up 3-6% across the board. Major stock markets in Europe are up 3-4%. At risk of sounding Pollyannaish about the whole episode it appears to me that Greece and the rest of the Eurozone are coming to terms and seeking out a middle ground which avoids the suicide option. My thesis for the past month has been that this looming crisis is avoidable across the Eurozone because it has morphed into a crisis of confidence and liquidity. This was never a crisis of solvency – at least when you view the Eurozone ex-Greece. The typical mechanism for a sovereign bankruptcy revolves around asset/liability term and currency mismatches. A common scenario is dollar denominated sovereign debt coupled with a floating currency, where the currency collapses, making the debt unserviceable in dollars.

But getting back to Greece, the sovereign debt issues are in fact related to solvency. The country has borrowed more debt than can ever be repaid at artificially low interest rates. Fortunately, for the Eurozone the size of the problem is manageable as Greece has a population of about 11 million and Greek GDP is only 2% of the combined GDPs of Germany, France, Italy, and Spain. It is less than 1% of the total Eurozone. This is the background that everyone knows about. The risk with the situation was that there was no way to force a compromise solution between Greece (Portugal and Ireland too) and the rest of the Eurozone. Merkel had been talking really tough about what Greek needed to do, and Greece had been angry about “unfair” demands for depression causing austerity. Of course the media focused on the dysfunction in the EU and the protests and rioting in Greece and the market became fearful of a broad unraveling. El-Erian summed things up well; “It’s like an orchestra with two sides, each playing different music and looking to the conductor—and there is no conductor”. Hopefully for the sake of the global economy we are looking back a year from now realizing how overblown this all was.

Today we have a continuation of very strong statements from Merkel who looks to be fully supported by the majority of Christian Democrats including her mentor, Helmut Kohl. German leaders are realizing that the country has been dramatically involved with the problem lending to peripheral Europe through its banking system and that Germany has also benefited from an artificially low Euro exchange rate. For every country which saves to an extreme degree and runs a current account surplus, there is by identity another country that must be consuming to a greater degree and running a current account deficit. Simplistically, one could say that Greece was forced into this role based on an artificially high exchange rate being imposed on them. Germany has been as much to blame as Greece in the Eurozone fiasco for being the creditor nation, and being complicit with the flawed construct which has been to their benefit over the past decade. Germany has realized they have much more to lose from a crisis as the German economy is relatively strong and the Greek economy is experiencing a depression.

With increasing numbers of German politicians getting behind Merkel, who in my view is clearly committed to the Euro, the dissenting camp seems to have been reduced to Finance Minister Wolfgang Schaeuble and a minority Free Democrat party which is taking an anti-bailout stand for political gain. The statements that need to be focused on from Germany are from Merkel and Parliament. It would be wise to filter out the more sensationalist noise, just like it would be wise to filter out sensationalist coverage of Greek riots.

Announced from Greece today in advance of Papandreou and Merkel going to dinner:

With the global economy in an environment that is nowhere near a recession – investors have needed to take a stance on crisis escalation or the crisis being contained. This has been the number one driver of all types of returns. My view continues to be that the crisis is containable. Meanwhile it has been stupefying how strong the economy has been despite the extent of the crisis thus far. If the crisis is averted there will be a jolt in economic activity as confidence improves. A near term acceleration in economic activity is completely off the radar of Wall Street and the investment community. Investors are not expecting it nor positioned for it, so it this comes about, even slightly, there would be very strong global equity returns – especially in Europe and Emerging Markets.