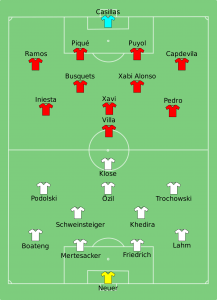 The plan forward with the Eurozone crisis is the German plan forward. Germany proposed closer fiscal union and increased austerity for EU-17 nations with high deficits and/or high debt burdens. This path suits German interests well because there is little that needs to be changed. Unfortunately from Spain’s standpoint, the German path forward is not what Spain needs. This dynamic is highlighted with yesterday’s unemployment releases. Spain hit a 22.8% unemployment rate, which is an all-time high, while Germany released a 6.8% unemployment rate, which represents a new low since German reunification.

It is clear that Spain needs dramatically lower interest rates relative to appropriate monetary policy set rates for Germany. It is also clear that Spain needs a drastically lower currency value relative to the currency value which is appropriate for Germany. But with EU-17 monetary policy set at “one size fits all” a flexible policy response is an impossibility. The vice is clamping down on Spain just as the point has been reached where there is no ability to enact fiscal stimulus due to debt dynamics and a large fiscal deficit. So the austerity, which Spain is rushing to implement, is the opposite of what is needed right now. Without the ability to stimulate a moribund economy, the only result will be more deflation and a general economic washout which swings to an extreme. This can also be described as a depression.

With Spain firmly on a track for less growth, not more growth, European leaders, including ECB members, have attacked the crisis as a political one and have been pushing for greater integration. The problem with this approach is that structural reform is a glacial process that can lead to progress over a multi-year period. Does Spain have this long? I can’t recall a modern economy that experienced 20% unemployment for more than 2 years and didn’t bust apart somehow through a devaluation of the currency or complete collapse and restructuring. Here are the examples which have come closest:

Spain will reach unchartered waters this year. The reaction of the populace to increased austerity and the German fiscal union with austerity plan may be one of the deciding factors on whether the EU-17 holds.