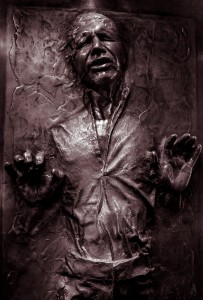 At the widely anticipated December 16th Fed meeting, the Board of Governors did the expected, and finally raised the US federal funds rate by 25 basis points. The rate-hike failed to surprise markets; the move was telegraphed and written about in advance by Jon Hilsenrath in an article on the front page of the Wall Street Journal, Wednesday morning, before the actual hike. So why did markets soar in anticipation of the hike, soar some more after the hike, and subsequently mini-crash on Thursday and Friday? No good answer on market action from CJF, but the volatility, exaggerated moves, and declining breadth, are all bearish indicators going forward.

CJF takes a contrarian view to the initial goldilocks interpretation of the Fed hike; the Fed action is hawkish, creating a major obstacle for the bull market. The immediate evidence supporting a hawkish view of the Fed policy change:

The S&P 500 is experiencing a challenging 2015. Returns are negative 2.6%, and this year is the first year since 2009 that it hasn’t paid off to sit with a long-skewed investment bias. Valuations are higher, above 17x forward earnings around the market peak, comparing to 12x forward earnings in 2011. In the past couple months, volatility picked up, and market moves look to be driven by positioning as opposed to fundamentals.

The backdrop for 2016 is a negative one:

1) The Federal Reserve is tightening monetary policy in a challenging economic environment where the expansion is showing its age (7-years old).

3) In actuality, the Fed probably won’t be able to hike 4 times in 2016. CJF guesses there will be only 1-2 hikes in 2016 before policy is put on hold for an extended period. The softening of economic and earnings data will initially be a negative for markets (until the Fed turns dovish).

The long opportunity in 2016 may come as weak data and a weak market environment get the Fed to turn more dovish which may lead to an outsized rally. This rally will be extremely difficult to time, position for, and exit, because the rally will ultimately be unsustainable. Unfortunately, 2016 is set to be similar to 2015; a modestly negative year for markets with a lot of volatility leading to very little in the form of returns.