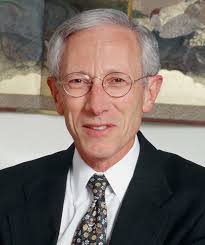 Stanley Fischer delivered a critical speech this weekend at the Jackson Hole, Economic Symposium, outlining the Fed’s forward looking view on inflation and the potential for a lessening of factors that dampen inflation. This speech signals the Fed is staying the course and determined for rate hike lift-off on the advertised time-table. CJF interprets this speech hakwishly, relative to market expectations for a push-out to the December lift off timeframe. It is likely that December is the latest possible preference for lift-off with September (or October) still very much on the table. Will be interesting to see how volatile markets react to some of the forceful language in the speech. The speech, in full, is a worthwhile read. Excerpts with CJF commentary:

The past year’s energy price declines ought to be largely a one-off event (chart 2). That is, while futures markets suggest that the level of oil prices is expected to remain well below levels seen last summer, markets do not expect oil prices to fall further, so their influence in holding down inflation should be temporary.

Of course, ongoing economic slack is one reason core inflation has been low. Although the economy has made great progress, we started seven years ago from an unemployment rate of 10 percent, which guaranteed a lengthy period of high unemployment. Even so, with inflation expectations apparently stable, we would have expected the gradual reduction of slack to be associated with less downward price pressure. All else equal, we might therefore have expected both headline and core inflation to be moving up more noticeably toward our 2 percent objective. Yet, we have seen no clear evidence of core inflation moving higher over the past few years. This fact helps drive home an important point: While much evidence points to at least some ongoing role for slack in helping to explain movements in inflation, this influence is typically estimated to be modest in magnitude, and can easily be masked by other factors.2

In the first instance, as already noted, core inflation can to some extent be influenced by oil prices. However, a larger effect comes from changes in the exchange value of the dollar, and the rise in the dollar over the past year is an important reason inflation has remained low (chart 4). A higher value of the dollar passes through to lower import prices, which hold down U.S. inflation both because imports make up part of final consumption, and because lower prices for imported components hold down business costs more generally. In addition, a rise in the dollar restrains the growth of aggregate demand and overall economic activity, and so has some effect on inflation through that more indirect channel.3

Can the Committee be “reasonably confident that inflation will move back to its 2 percent objective over the medium term”? As I have discussed, given the apparent stability of inflation expectations, there is good reason to believe that inflation will move higher as the forces holding down inflation dissipate further. While some effects of the rise in the dollar may be spread over time, some of the effects on inflation are likely already starting to fade. The same is true for last year’s sharp fall in oil prices, though the further declines we have seen this summer have yet to fully show through to the consumer level. And slack in the labor market has continued to diminish, so the downward pressure on inflation from that channel should be diminishing as well.

Reflecting all these factors, the Committee has indicated in its post-meeting statements that it expects inflation to return to 2 percent. With regard to our degree of confidence in this expectation, we will need to consider all the available information and assess its implications for the economic outlook before coming to a judgment.

In addition, the July announcement set a condition of requiring “some further improvement in the labor market.” From May through July, non-farm payroll employment gains have averaged 235,000 per month. We now await the results of the August employment survey, which are due to be published on September 4.

In making our monetary policy decisions, we are interested more in where the U.S. economy is heading than in knowing whence it has come. That is why we need to consider the overall state of the U.S. economy as well as the influence of foreign economies on the U.S. economy as we reach our judgment on whether and how to change monetary policy. That is why we follow economic developments in the rest of the world as well as the United States in reaching our interest rate decisions. At this moment, we are following developments in the Chinese economy and their actual and potential effects on other economies even more closely than usual.

The Fed has, appropriately, responded to the weak economy and low inflation in recent years by taking a highly accommodative policy stance. By committing to foster the movement of inflation toward our 2 percent objective, we are enhancing the credibility of monetary policy and supporting the continued stability of inflation expectations. To do what monetary policy can do towards meeting our goals of maximum employment and price stability, and to ensure that these goals will continue to be met as we move ahead, we will most likely need to proceed cautiously in normalizing the stance of monetary policy. For the purpose of meeting our goals, the entire path of interest rates matters more than the particular timing of the first increase.

With inflation low, we can probably remove accommodation at a gradual pace. Yet, because monetary policy influences real activity with a substantial lag, we should not wait until inflation is back to 2 percent to begin tightening. Should we judge at some point in time that the economy is threatening to overheat, we will have to move appropriately rapidly to deal with that threat. The same is true should the economy unexpectedly weaken.

Finally, while I have been talking today about some international influences on economic conditions in the United States, I am well aware that, when the Federal Reserve tightens policy, this affects other economies. The Fed’s statutory objectives are defined in terms of economic goals for the economy of the United States, but I believe that by meeting those objectives, and so maintaining a stable and strong macroeconomic environment at home, we will be best serving the global economy as well.6

The USD is likely to strengthen on these comments. Volatility in financial markets will remain with an important payroll report, jittery emerging markets, destabilized commodity prices, and a big Fed meeting this month.