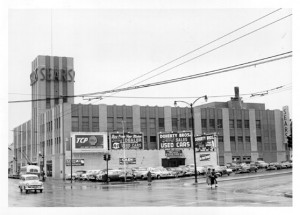 Sears Holdings pre-reported Q4 results which showed a rapid deterioration yesterday. The most alarming item in the press release was the rapid deterioration in sales trends at both Sears and Kmart. Sears comparable store sales trends ran -3.3% in the YTD period (which is a month away from the full year) while the trends through the first two months of the 4th quarter came in at -6.0%. Kmart sales slowed from -1.8% to -4.4% in the YTD to QTD period.

Retailing is tough and you can’t run a retailer without regard for the shopping experience. Eddie Lampert attempted to replicate the magic formula he applied to AutoZone (AZO) with Sears Holdings. The experiment has failed in spectacular fashion. In order to understand what went wrong with Sears it is helpful to see what went right with AutoZone first:

Eddie Lampert is the largest shareholder of AutoZone (AZO) and he came up with a vision for improved capital allocation for the company through the past decade. Lambert correctly identified that the company was spending too much cash flow back into capital expenditures. Lampert realized that auto parts retailing was a relatively penetrated business and that growth related capital expenditures should be reduced and scrutinized. AutoZone’s store growth rate was cut, capex was slashed, cost cutting and margins were put into focus, and the ample cash generation was used to purchase shares and reduce the share count. Lampert’s strategy resulted in an improvement in operating margins from 15-16% up to 18% while total sales grew within existing stores. AutoZone didn’t explicitly focus on maximizing sales because of the strategy to cut costs and generate high margins first. Although sales per square foot didn’t grow meaningfully while the strategy was implemented they did stabilize at $250-$270 per foot.  Recently, based on strong same store sales, AutoZone’s store productivity has improved to the high end of the multiyear range. AutoZone’s share count was reduced from 107m shares in 2002 to 41m shares at present. During this period, EPS swelled from $4 to $19.50. It is easy to see why the share price rose from $60 to $330. The two primary reasons why the strategy was so successful:

1) During the first 5-years of the strategy, the market was skeptical and AutoZone shares remained cheap. This enabled Lampert to buy back the shares at a low valuation which enabled a greater reduction in the share count relative to a fixed level of free cash flow available for share buyback. This helped swell earnings per share dramatically in later years.

2) The strategy to scrutinize capex so tightly worked well for an auto parts retailer because you don’t eat in the stores, and women don’t buy apparel there. The stores are mostly for men and it’s ok if there is an oil stain on the concrete floor that stays there for years.

Sears resides in a much more competitive segment of US retailing. The company must compete with the likes of Wal-Mart, Target, Macy’s, Kohl’s, JC Penney, Best Buy, Home Depot, Lowes, and Amazon. As weaker competition has been crushed over the last 20 years, the remaining competitors are financially strong and dedicated to gaining market share. When others are spending lots of cash flow on both growth and maintenance capex, it becomes more dangerous to not remain within the range of what consumers expect to be normal. With Target, Kohl’s and the home improvement centers either opening new stores or aggressively remodeling the existing fleet, Sears started to stand-out as “tired”. You could see this in the Sears financials as Lampert reduced Sears capex to less than 1% of sales. This is dramatically off market relative to other retailers who routinely spend 2-5% of sales on capex. The strategy has caught up to Sears and it’s now too late to turn-around the Sears brand and retail model. The company has lost touch with younger customers and the dilapidated store base is now an operational liability. Adjusted EBITDA has been crushed and is declining at a 50% rate due to deleverage on negative sales. Operating profits which amounted to over $2B at the start of the strategy have now declined to an operating loss. The blaring reasons for the failure are three-fold:

1) Eddie Lampert commenced the strategy when Sears had a very high valuation and stock price so that capital allocated to share buyback a number of years ago was wasteful, and failed to make meaningful enough progress in reducing the share count relative to the rate of the decline in the operations.

2) Sales never stabilized. Year after year sales trends were negative. The growth by shrinking strategy has always been flawed for cyclical retailers which sell fashion and household items. Perhaps there could have been a course correction in 2006-2007, but now it is much too late.

3) The bear market in real estate. Perhaps Eddie Lampert wanted leverage to the US real estate market through controlling a cash flow generating retailer that owned the majority of Sears’s locations. If real estate markets could have been extrapolated higher from 2006 perhaps he could have pulled off the asset sale strategy and maintained a decent valuation for the shares.

It is too late for Sears to turnaround. The appropriate valuation is now a discount to book value which reflects the forced liquidation of stores in a weak environment to sell them. There will be all kinds of charges along the way and a valuation of some 30-50% of book value seems reasonable, short of a return to a booming economy. 30-50% of book prices the shares around $20-$30 based on book value estimates. Of course book value will also trend down over time unless the Sears real estate starts to appreciate or the firm can generate profits.