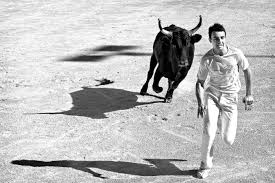 I’ve been writing about the impossibility of the ECB running appropriate monetary policy for 17 different nations. The dilemma couldn’t be more evident when contrasting the economy of Spain with the economy of Germany. Spain actually has less sovereign debt relative to GDP than does Germany. The problem for Spain isn’t the level of debt the country has incurred, but the depth of the current recession and the questionable capitalization of the Spanish banking system. Spanish inflation is running in a range of 1.7%-3.0% depending on how you define it (1.7% core inflation). This morning, bond auctions in Spain only attracted investors at much higher yields, approaching 7%. As a result of higher interest rates and a deepening recession (which is helping to reduce inflation), real interest rates in Spain have approached 4-5%.

The US Federal Reserve would never tolerate a situation of such severe economic stress and high real interest rates. The US Fed has a dual mandate to contain inflation and to foster maximum employment. Spain lacks its own central bank for monetary policy purposes, and the ECB is more focused on price stability than economic growth. The lack of having localized economic fire fighters is a fundamental flaw for the Eurozone, which is being exposed based on the crisis. The Federal Reserve has set monetary policy to reduce real interest rates and it has also implemented quantitative easing through buying Treasuries and mortgage securities. The problem for Spain is that the monetary policy transmission mechanism is broken because the ECB policy rate has decoupled with Spanish sovereign debt yields (as credit risk is increasingly priced in).

Spain’s unemployment rate is now over 22%. It‘s inhumane to not aggressively loosen monetary policy to ease the severe burden of the financial crisis on the Spanish people. The ECB’s mandate isn’t to focus on unemployment, nor is even to focus on Spain; the only mandate is price stability for the collective Eurozone. The result of the above tension will be a deepening recession for all of the nations of the Eurozone where yields rise as the economy slows. The countries where the pressure will grow most acute are Spain, Italy, Belgium, and France. It will be important to closely monitor economic and corporate data from these counties in order to understand the prospects of containing Europe’s financial crisis and the implications for global financial markets.