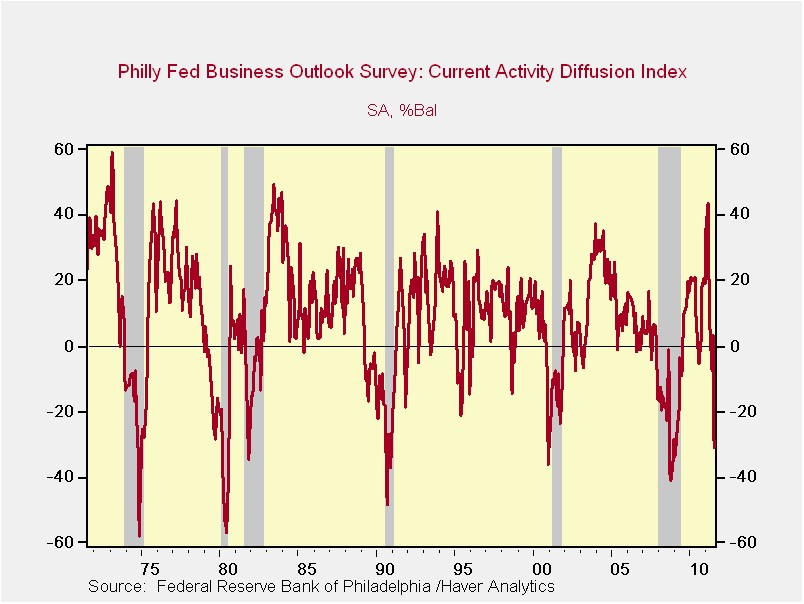 What is the Philadelphia Fed Index? Why has it exacerbated the market’s sharp declines from the morning? (see previous post)

In short, the measure is an activity-based survey. It isn’t an actual measurement of anything, other than how people feel or sentiments on a given day. The survey-based results are indicating we are currently in (or on the cusp of) a recession. Period. I feel it prudent to lift my “probability of a recession” up to 50%. Before it appeared to be more of a 1-in-3 shot. There simply hasn’t been an instance in the past 40-years where this particular measure was -30 and we weren’t in, or about to enter, a recession. In the attached chart, the grey bars are recessions. We believe this survey represents the height of disgust with Washington and the resulting lack of confidence in the business community. This is a clear shot across the bow, that our government needs to be focused on confidence inspiring public policy, that at a minimum, does not retard job growth in our country by creating massive uncertainty. The economic environment is way too fragile for partisan bickering or populist politics. Hopefully this data acts as a wake-up call to policy makers that:

We attach the actual text released on the Philadelphia Fed website (emphasis is CJF):

Responses to the Business Outlook Survey this month suggest that regional manufacturing activity has dipped significantly. The survey’s broad indicators for activity, shipments, and new orders all declined sharply from last month. Firms indicated that employment and average work hours are lower this month. Price indexes continued to show a trend of moderating price pressures. The broadest indicator of future activity also weakened markedly, but firms still expect overall growth in shipments, new orders, and employment over the next six months. The collection period for this month’s survey ran from August 8-16, overlapping a week of unusually high volatility in both domestic and international financial markets.

The survey’s broadest measure of manufacturing conditions, the diffusion index of current activity, decreased from a slightly positive reading of 3.2 in July to -30.7 in August. The index is now at its lowest level since March 2009.  The demand for manufactured goods, as measured by the current new orders index, paralleled the decline in the general activity index, falling 27 points. The current shipments index fell 18 points and recorded its first negative reading since September of last year. Suggesting weakening activity, indexes for inventories, unfilled orders, and delivery times were all in negative territory this month.

Firms’ responses suggest a deterioration in the labor market compared with July. The current employment index fell 14 points, recording its first negative reading in 12 months. About 18 percent of the firms reported an increase in employment, but 23 percent reported a decrease. The percentage of firms reporting a shorter workweek (28 percent) was greater than the percentage reporting a longer one (14 percent). The workweek index fell 9 points.

The survey’s indicators for future activity fell 22 points this month, more than reversing the increase of 21 points in July.  The indexes for future new orders and shipments also fell 12 and 10 points, respectively. The index for future employment decreased more modestly, by 2 points, and remains well below average readings in the first quarter of this year. More firms expect to increase employment over the next six months (32 percent) than expect to decrease it (24 percent).

In special questions this month, firms were asked about the importance of seasonal factors on production.  Almost 40 percent of firms indicated that seasonal factors have a significant influence on monthly production levels. Nearly 29 percent of the firms had scheduled shutdowns or slowdowns during the summer months this year. But, on balance, production levels were not particularly unusual this year: The number of firms indicating that production decreases were greater than usual during July and August was only slightly higher than the number indicating that production decreases were less than usual.

According to respondents to the August Business Outlook Survey, the region’s manufacturing sector is much weaker this month. The survey’s indicators suggest a decline in demand for manufactured goods, and shipments and employment were also in decline. Price measures suggest continued moderation in price pressures, and more firms reported price declines for their manufactured goods this month. The broadest indicators for growth over the next six months, including employment, fell back notably this month but remain slightly favorable to expansion.