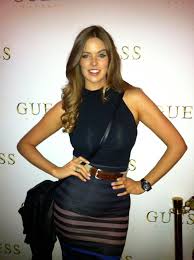 Guess (GES) is an undervalued global brand. The stock performance has decoupled relative to many other global apparel stocks based on a number of factors such as: fashion, US comparable store sales, exposure to Europe, and management team changes. Negativity looks overblown for investors who have patience and perspective, especially relative to valuations of other apparel brands with global aspirations such as Abercrombie & Fitch, Ralph Lauren, PVH, Coach, and True Religion. The following research will explore why Guess is an investment opportunity now:

Here are the reasons why Guess (GES) shares are a buy right now with almost 100% upside to $74 in two years:

2)  Fears related to exposure to Italy are overblown

4)  Guess has a best-in-class business model

5)  Valuation is too low with potential for an acquisition.

We will address each of the above themes point-by-point and conclude with both the investment return targets and risks.

The Guess business model has changed over the past decade. In the 1990’s, the company was a wholesale only apparel vendor (focused mainly on denim) which had less control over the brand as they only sold through department stores such as Macy’s. The Marciano brothers (Maurice & Paul) founded Guess back in the 1980’s and are still involved in the company management today. Guess has been an American success story as the brothers moved from France to California and launched the brand and the company. Michael J Fox wore Guess jeans in “Back to The Future”.

About a decade ago, the Marciano’s took a step backwards in order to move forward by limiting wholesale distribution and embarking on a retail strategy, which was very controversial at the time. Let’s review the past ten years of accomplishment and the organic growth.

Guess has broadened the store base by geography, sub-brand, and store ownership model, all of which help to diversify risks on a quarter-to-quarter basis.

Guess has developed the following diversity to the store portfolio:

The ability for Guess to simply continue rolling-out the store base around the world, with a flexible store format is a key differentiator relative to many other specialty apparel retailers here in the US. What creates the opportunity is the past stewardship of the Guess brand which the Marciano brothers nurtured for over 20-years.

Guess provides segment information for Italy directly in 10k filings since this is the first major market which Guess has launched in – within Europe.

Guess no longer updates the specific store base by country but as of Q3 2010, there were 138 stores in Italy which was approximately 28% of the European store base. Guess stores in Italy are very productive (each store does high volumes) and the management team has demonstrated that the brand has cachet in one of Europe’s toughest fashion markets (Italy or France?). The multi-year success in Italy bodes very well for the visibility behind Guess’ organic growth strategy in Europe which is simply to open additional stores in a number of countries where there is much less store penetration and high brand equity. Focus markets for Guess are: France, Spain, Germany, Northern Europe, Russia, and Turkey.

Important to note – Guess earns higher profit margins in Europe than they do in North America. So the organic growth opportunity in Europe is also margin accretive.

Management has been very excited about the vast growth potential in China with good reason. A number of competitors are achieving success in China and selling products at premium price points and higher gross margins as Chinese Consumers are increasingly aware of strong global brands, and desirous of these products. With Chinese GDP growth of over 9%, and a fast growth organic store rollout, China can lead the way for Guess’ Asian growth for a number of years. Also there is a very strong business in Korea so management has some history of success in this part of the world. As China works, there are a host of additional Asian countries where Guess has little to no presence but plenty of opportunity including: Vietnam, Thailand, Malaysia, Indonesia, and the Philippines.

Focusing on the financials, Guess has a tremendous business model. Guess is not a fashion-only, one-trick pony. The company has very strong margins and profitability metrics to go along with the strong growth.

Guess’ stock price valuation is at all-time lows (ex financial crisis) since the company transitioned (and improved) the business model from a wholesale-only company to a global retail and branding powerhouse. The shares have traded to a low valuation of 10x forward earnings (right now) to as high as 21x forward earnings in the mid-2000s. Currently the EV/EBITDA is 6.5x trailing EBITDA and 5.0x Crackerjack’s estimate of EBITDA for 2012. This seems way too cheap (multiples for earnings and EBITDA) for a company with the brand strength and growth potential which Guess has. Private equity firms which are interested in this space will typically pay 9x EBITDA in a deal ($52 stock price).

Guess shares are essentially flat since 2007.  Demonstrating the value, since 2007:

Balance Sheet is stronger with net cash growing from $2.94 per share to $4.63

WHY HAS THE VALUATION COME DOWN SO MUCH?

Public company valuations come down when market participants are either scared, frustrated, or don’t believe in the future.   There are numerous concerns and risks swirling around Guess which Crackerjack believes are more than priced into the share price:

Crackerjack believes that all of the above risks are more than reflected in the share price. With the strong cash flows the company generates, dedicated investors will be rewarded as the company buys back shares opportunistically with free cash flow. In addition there is a north of 2% dividend yield while waiting for a re-rating of the shares.

In less than two year’s time if the company reverts to normal valuation multiples the shares will approach 16x earnings. We believe that Guess’ multi-decade track record of success and brand stewardship warrants this valuation.