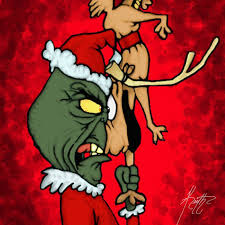 Bah humbug. Black Friday jumped the shark sometime around the turn of the century. Nonetheless, a disproportionate amount of retail and media focus continue to emphasize Black Friday’s importance as an event. While declining over several years, this year got markedly worse, to the point where media reports were forced to highlight the “normality” of shopping on Black Friday and the notable empty parking lots. This year, the Grinch brought store based retail sales over to online. Sources of information are disjointed but echo the same themes enough to draw some early conclusions:

“Driving up to a nearly empty parking lot at a Wal-Mart in Houston Friday morning, Dora Rodriquez, 39, stopped her silver hatchback in surprise and called out her window to another shopper: “Excuse me, the Black Friday sale – it’s ended already?”

“On Friday, Retail Metrics forecast a 0.9% drop in November sale-store sales for a handful of chains due to uninspiring store traffic.”

IBM highlights the explosive growth in mobile as a drivers of both sales and traffic:

The world is changing. While this change should not come as a surprise to the retail sector, it is still extremely problematic. Retail was conceptualized as an industry before the internet era, so business models with very high fixed costs (leases and labor) are not equipped to compete with online giants. Past capital investment focused on stores, not websites and speed of distribution network. The retail store losing its “destination status” turns the business model upside down. A number of observations on the potential for retail disasters in the 4th quarter:

The holiday period is shaping up to be a brutal one, spelling trouble as full year profit forecasts are made/lost in the 4th quarter. Be wary of retail stock investments, the XRT bounced recently on hope from colder weather and short covering. The specialty retailers and department store operators within the XRT are as much market leaders as horse and buggy stocks. The retail sector generates plenty of cash, but the stocks will continue to de-rate as growth slows and more of the cash flow is used for catch-up technology investments.

Below a table of the excess inventory in the department store channel: 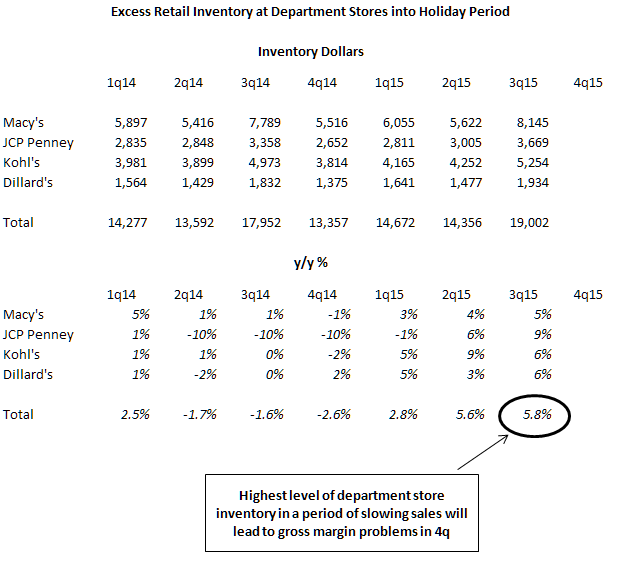