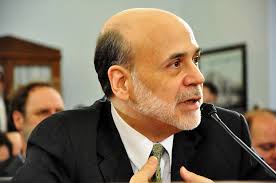 Ben Bernanke made a highly referenced speech earlier this week, credited with fueling a sharp rally in the stock market. The speech is colorfully titled: “Recent Developments in the Labor Market” and is a worthwhile read for investors and those interested in the US economy. The speech highlights a growing controversy in the labor market regarding the constraints on hiring. The traditional school of economic thought focuses on the cyclical factors which have depressed hiring and constrained labor market improvements. In Fed speak this is described as insufficient “aggregate demand”. A new school of thought is emerging focusing on the bottlenecks in the job market stemming from; the aging of the workforce, globalization, and technological change. Obstacles based on these reasons are described as “structural impediments”. Ben Bernanke’s answer on which factor is muting the pace of hiring relative to past expansions?

The Fed correctly concludes that the factors constraining the job market could be based on a lack of aggregate demand and “cyclical factors” but they also could be based on “structural forces”. Don’t expect an answer anytime soon. It will take academic economists many years to determine labor market imbalances and their answer will come with limited precision and will only be known “ex-post” after everything has already happened.

My view is that both factors are plausible and having an impact on the overall job market. One would be obtuse not to accept that:

In addition to these somewhat unexpected (by the Federal Reserve Board) structural factors, the corporate sector has been conditioned by a crisis and a half over the course of 2009-2011. Optimistic attitudes will only return slowly, after a number of better years. Moreover, we are heading towards what looks set up to be both a populist and vitriolic election year. So uncertainty will remain high and aggregate demand constrained.

Ben Bernanke spelled out in the conclusion of his speech that continued accommodative policy is the correct course of action if hiring is constrained by a lack of aggregate demand. Since the Fed won’t know what is constraining the job market for many years, Fed policy has again been clarified to be prospectively accommodative; at least until the unemployment rate comes down quite a lot. The entire dynamic is a positive one because as the Fed remains accommodative, and the corporate sector in the US remains uncompelled to hire more aggressively, corporate profit margins will remain high while the global economy grows. This is one reason that dips based on growth fears have continually been bought by investors over the past 4 months. With the world exceptionally fearful and vigilant towards a large growth slowdown the imbalances required to actually make it happen aren’t in place. But the policy accommodation to maintain the modest economic growth we do have in place will persist for a long time.