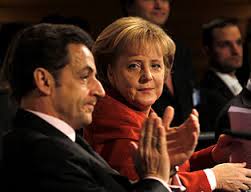 Yesterday, German Chancellor Merkel and French President Sarkozy proclaimed they are convinced that Greece will remain in the Eurozone. While the announcement was short on details, the spirit of it was enough to lift markets. Why news such as this can have an impact is because the markets have started to invest with “crisis” as a baseline result. This is why I’ve been holding the view that at certain price levels it is quite sensible to be constructive with investing despite how bad the news is – the news gets in the price. Recently the market has been reflective of this dynamic so news which is really just a signal of continuing to work together can actually be quite bullish.

The present debate around Greece, the role of the Eurozone as a union, and the role of the ECB, has much wider implications than the much more mundane topic of how to ring-fence or conduct a managed default of a profligate country in the EU that can never repay its debts in full. Smaller and emerging economy nations have run into credit and default problems numerous times through modern financial history and it wasn’t sufficient to derail the global economy into recession. It happened in Argentina, Russia, Mexico, Thailand, Indonesia, and other countries. The issue which is much more important than Greece was whether Greece could derail over a decade’s worth of progress on creating a European Union. The implications of the later are disastrous as I have outlined before. The Greek Moment, has forced Europe to introspectively review its collective identity. While there are mixed views, and protesters, and politicians speaking out against the wayward ways of other members if the result is some collective sanity, then this crisis can and will be contained.

I believe that Germany, France, Italy, and Greece have all reflected on the fantasy that perhaps it would be better without some of the other nations involved and realized it won’t be. The fabric of the entire Eurozone is at stake if Greece or austerity in general gets handled the wrong way. The European elite will strive to salvage the Euro Project if there are still hopes it can be saved. Again to abandon the Euro and the Eurozone as a union would have devastating economic, geo-political, and social consequences for all of Europe. Post WWII, the Eurozone was set up in order to minimize future wars but has subsequently expanded to create more of a European community, foster international  trade, minimize the costs of travel and tourism, and collectively enhance competitiveness and productivity which would create jobs. The Eurozone remains an incomplete construct without the ability to customize monetary policy for individual countries despite having a common currency. These issues will be ongoing projects for the Euorzone over the next decade if it does indeed hold together. Still, there have been some slight positive developments which have been enough to cause a bounce in the S&P from 1,119 (on a closing basis) to the vicinity of 1,200 at present (7% move). Most markets in Europe have rallied even more.

The positives this week:

I’m staying optimistic that global crisis and even global recession will be avoided in 2012. Consistent with this view point, the current set of investment opportunities appear outsized. The S&P 500 could run to the 1,300s before valuations even start to get back to normal ranges.