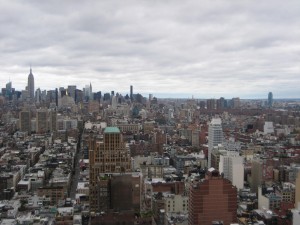 Shortly after 10:00am, everything started to clear up in NYC. I went for another run, like I did yesterday right before the storm hit. It looks like there will be virtually no major damage save for areas very close to NY Harbor downtown. I would be shocked if the New York Stock Exchange doesn’t open “business as usual” on Monday morning. “Wall Street Professionals” can be called many things – but they certainly aren’t lazy and generally rise to the occasion against adversity. The storm wasn’t nearly as bad as some of the more dire damage forecasts. I ran the entire downtown loop and was surprised to see no broken windows anywhere. With as many limitations as humanity has, apparently we can construct windows that withstand rain and heavy winds! Battery Park (which was evacuated) was bustling. Yellow police tapes put up to block passage, were strewn about and pedestrians went everywhere freely. There were fisherman on the Hudson River waterfront (isn’t the good fishing right before a storm not after it?). The iconic Wall Street Bull was unperturbed in front of 26 Broadway (and still attracting tourists).

The storm will end up modestly boosting retail sales in the northeast during the final week of August, which will help lift a month that already wasn’t trending too poorly. The weekly retail sales survey indexes (Redbook and ICSC) were trending almost in-line with pretty strong readings from June and July. I’m continuing to hold the view that we are not in a recession or clearly going to be in one this year. The weakest the economy may look all year, may end up being the morning the Philadelphia Fed Index headlined at -30. The other August data points are failing to corroborate that degree of weakness. I’m optimistic that some of the economic data points will start to look better in the fall so long as we can avoid a redux into another financial crisis. The logical place for a financial crisis part deux would be in Europe. If European Government bond yields were to spiral into a free-fall with negative feedback loops it would be a major problem, but I believe the ECB stepping in and drawing a line in the sand with regard to Italian and Spanish bond yields will ultimately have been sufficient to avoid a near term crisis. Does Europe have severe fiscal restructuring ahead and depressed economic growth? I believe so. But Europe hasn’t really been the growth driver of the global economy for many years, and avoiding crisis while fiscal budgets restructure is a much better situation than other more bearish outcomes that seemed on the table earlier in August.