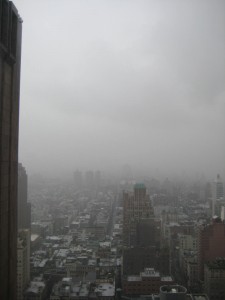 Ok – I know these lyrics are for “Eileen” and not “Irene” but the names sound similar and many confuse the name of the one hit wonder from Dexy’s Midnight Runners anyhow. This morning I woke up in downtown Manhattan and things were very much normal, the calm before the storm i suppose.

From an economics and markets standpoint – i expect this all to end up being non-news news. I’m hanging out downtown, completely unworried, with a powerful reading flashlight handy. One implication of the storm will be a huge boost to August broad-line and supermarket retail sales. Public retailers such as Wal-Mart, Target, Costco, Whole Foods, Home Depot, Lowe’s and more, are going to see a significant boost to retail sales. This will make the data points for August difficult to interpret and in my opinion, everything will look very “non recessionary”. The result will be that pundits and prognosticators will need to look beyond August and out to September for the long awaited consumption slowdown that will be requisite in order for 2011 to start feeling at all like 2008/09. This isn’t a bad thing because August had the ridiculousness of the government debt ceiling raise debate, sovereign debt fears escalated in Europe (this has been fixed by the ECB), fear of a banking crisis redux, and a dramatic stock market plunge. If August can’t take down the economic growth rate to flat or recession territory, then perhaps September will look better if it lacks the negative catalysts of August.

The photo is the view from my apartment downtown. I’ll attach more photos to this post as conditions change, assuming i still have an internet connection.

3:49 : if you can see the empire state building there is still no storm yet