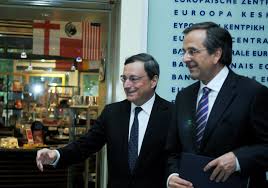 Who is Mario Draghi?

Today is day #1 of a new job for Mr. Draghi, the President of the ECB, which right now is the world’s most powerful position in finance. Under normal circumstances, that position would be the Chairman of the Federal Reserve Board but at the present moment, the ECB President will have more of an impact on the direction of the global economy in 2012. I wish I could outline a viewpoint on whether Mario Draghi tends to be more of a hawk or a dove. Based on a read of the few writings and speeches that are archived it is difficult to have a strong impression.

Here is what I came across which I believe to be concrete:

Back in February, Wolfgang Munchau published the following editorial for the FT stating that Draghi was the only remotely qualified candidate for ECB President (from the existing ECB pool).

Some items in the press:

May 25th 2011 – Draghi warns on the strength of the global recovery but also how overheating is a clear and present danger in his first speech since being nominated to succeed Trichet. The speech takes place in Germany and Draghi praises the Soziale Marktwirtschaft – Germany’s social market economy construct.  <point hawkish>

June 14th 2011 – Draghi makes a speech in Brussels to European Parliament. He highlights the following; “I believe the EMU, with the euro at its centre, has been a great success, a success that should be preserved for the sake of all the citizens of Europe. Let me state that none of the recent events, including the global crisis, call this fact into question.”  <point dovish>  Draghi goes on to stress the importance of price stability on a few occasions and interjects: “Non-standard measures need to be phased out to the extent they are no longer needed to support the functioning of the transmission of monetary policy to the economy; we must make sure that liquidity support to the economy is maintained as long as appropriate; but also that we do not sow the seeds of future imbalances and create and addiction to our liquidity. <point hawkish>

July 8th-10th 2011 – Draghi presents: “Les Rencontres Economiques d’Aix-en-Provence” on the topic of avoiding FX intervention and free markets for currency rates. <no points awarded but I take note of this in light of policies in China, Japan, and Switzerland>

July 13th 2011 – Draghi provides an address in Rome at the Italian Banking Association. He highlights numerous times the strength of the Italian banking system, how the Italian fiscal situation is headed in the right direction and how Italian GDP improved in Q2 at a rate in line with the euro-area average He also highlights the loan growth provided by the large Italian banks. <interesting views on the Italian banks and economy – would this make Draghi more likely to intervene against the current attack on Italy in the global financial market?>

October 19th 2011 – Draghi provides an introduction to the opening of “Cultural Day” for the ECB. He highlights Italienische Reise which chronicled Goethe’s travels from Germany to Italy in 1786. He goes on to discuss Mozart and classical music as an expression of European cultural growth.

October 26th 2011 – For World Savings Day Draghi provides an address on the status of Italy. He highlights the need for structural reforms. Towards the conclusion of his last official speech as Governor of the Bank of Italy are some interesting comments: “Italy bore none of the blame for the crisis. But because of never redressed structural weakness Italy was overwhelmed by it, penalized more than others, to the point that today, owing to its slowness in overcoming its own crisis, Italy itself has become a cause of general crisis.”

The inner workings of the ECB are not a transparent process. The ECB doesn’t release the details of arriving at a consensus with respect to monetary policy decisions. Draghi comes on board in the midst of a crisis of confidence in the Eurozone. Perhaps a clean slate and fresh approach is just what the ECB and European monetary policy needs. Depending upon the severity of market doubts regarding the degree of global support for an expanded EFSF, Draghi may or may not have time to move forward at a deliberate pace. This could end up being either a blessing or a curse for Mr. Draghi as he starts his tenor as the President of the ECB.