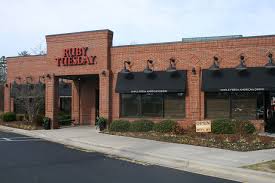 Ruby Tuesday (RT) is one of the largest players in the US bar and grill segment. The restaurant chain consists of 841 restaurants with the vast majority of the restaurants company operated and 95 franchised. The secular trends have been working against the bar and grill segment based on healthy lifestyle trends and consumers moving away from burgers and fries towards lower fat options. Moreover the bar and grill space boomed in the 1990s and became over stored. Some bar and grill chains went bankrupt during the financial crisis and some chains have converted to other concepts. Despite the negative headwinds, Ruby Tuesday remains standing with decent operating metrics but with limited ability to grow from here. The result has been a company run largely for cash flow. The company is leveraged quite a bit (3x debt/ebitda) but uses free cash flow to not only retire debt but also to retire shares. In the recent quarter, Ruby Tuesday spent $18M to buy back stock. Management is confident maintaining some financial leverage because they believe in their ability to hold market share in a more rationalized environment and there are also substantial real estate assets with over 300 company owned restaurants. Estimates of real estate value in the range of $400-$500m have been produced by sell side research reports.

Last week, Ruby Tuesday had a decent sized earnings warning based on a decline in same store sales in the current quarter and continued pressure on restaurant operating margins. The shares have held in pretty well since the earnings warning last week and look to have bottomed close to $7. Full year earnings guidance was reduced by 15% from a range of $0.75-$0.80 to a new range of $0.60-$0.70. I believe the reason is based on the cash flow support. Ruby Tuesday can sustainably generate about $100M in free cash flow per year. The enterprise value is $800M and the market capitalization is sub $500M. This highlights the value inherent in the shares and is the reason the stock won’t trade down on an earnings miss. The investment thesis for Ruby Tuesday is simply sustenance. Investors who believe that the concept has a right to exist in the restaurant space and can simply do what they are doing now for the next number of years the shares should perform quite well from this valuation. The shares can rally about 13% per year just based on free cash flow generation relative to the enterprise value. Of course if the economy improves Ruby Tuesday would be very leveraged to economic improvement. If we go into a recession, Ruby Tuesday would be in an uncomfortable spot with 3x financial leverage.

With the start of the Q3 earnings season, I’m keeping an eye on individual stocks closely because there are a number of public companies with exceptional cash flow support. Low valuations don’t matter on days where the market is panicky, but matter immensely on days when the environment is simply stable. I’m looking forward to writing more about companies again because I believe this is a very important check on the reality of the macroeconomic situation. It will be a refreshing change of pace if the environment stabilizes and I can write about Europe and the prospects of a hard landing in China every other day as opposed to all the time.